Catching up with a multilingual child 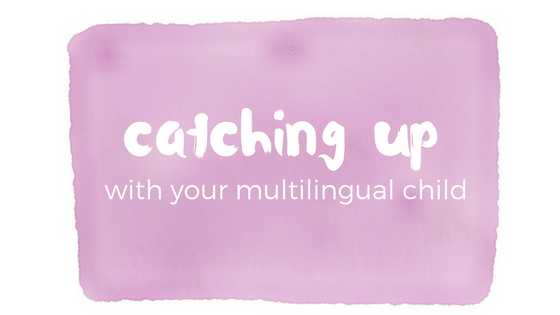 Once, there was a girl praised for her writing skills, praised for her rich vocabulary in primary school. She later went through phases of being better and worse using her native language, but surely she was not bad at all.

And then she moved abroad.

Her friends spoke one language – English, the country spoke another language – French. She still worked, read and talked mainly in her native tongue, it were two other languages that were bothering her. It was frustrating not to feel at ease using a language that she has been learning since being 5 years old. More practice meant better skills and more confidence.

She also started learning French. It was new, and it was exciting.

Then she had a baby. Some time before that she lost her (native tongue spoken) job. And some time after that her best (Polish speaking) friends had left to live in distant countries.

She found herself surrounded by people speaking English language, her life quickly became full of English. Even her toddler daughter started to speak English without anyone’s effort.

It was when she went on holiday to her home country and listened to people talk, when she realized she hasn’t used many of these words for ages. It was evident: she was slowly loosing her native tongue.

Obviously using a language with 1 adult and 1 toddler wasn’t not enough to constantly improve and enrich vocabulary.

Her English improved tremendously after hours of conversations, reading and plenty of movies.

So it’s time for her to work on her native tongue: talk, read, watch, and hope for the best. After all, her child’s Polish skills depend on hers. Bummer.

*By fluent I mean: vocabulary richness on well-educated native level. I mean being at ease with verbalizing complicated thoughts and ideas. I know that by many definitions I am fluent in probably all three of this languages but it is still not the level that satisfies my critical self.