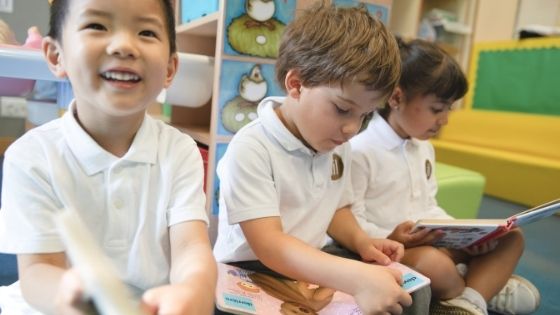 Institut International de Lancy (aka IIL) is a school with a long-standing history starting in 1903. The school offers a French section (with a French curriculum), and an English section (with a British curriculum). They have recently expanded their bilingual section and it sounds fascinating!

To know more about this program, and about the school in general, I talked to two moms whose children attend the ILL bilingual section.

IIL is an international school with a plurilingual approach meaning they teach English and French as core languages in the classroom but every child’s home language is welcomed and encouraged. From early years education (3- 6 year old) through primary school (6 – 11 year old).

IIL offers 3 sections (English, French, and bilingual). I will focus on the bilingual section, which was launched 3 years ago.

When Christina decided to place her children at IIL, it was based on several factors. After looking into the other private schools in Geneva, she concluded that IIL was the right choice for her family: the fees are competitive; she liked their academic rigor and the idea of uniforms. The high-level education is high on her priority list, and ILL meets her expectations. But most importantly, she was hooked when she discovered the high-quality bilingual program!

Given their approach to learning languages at IIL, the school decided to create their version of a bilingual program where children can learn both languages, at the same level, at the same time.

In the bilingual section, children follow both the French and the British curricula. Their activities are in English and in French. Native English speakers will work more on their French and vice versa. These kids may do some work slightly harder than those from other sections, as this is an ambitious program. But according to the parents I talked to, it really works, and kids love going to school!

Because English and French curricula are different and focus on different skills for different ages, children in the bilingual section work first on writing in French and start reading in English.

Another mom, Kate, told me that her daughter started the school at 3 ½ speaking only French. Two years later she is fluent in English. At aged 5 ½, she starts her adventure with English literacy skills as well, and it is all going well.
99% of children in her daughter’s class started with one language, and two years later they can communicate in both languages. It does sound fantastic!

According to Kate, kids learn about the same topic in both French and English (but on different days), so that they can have a bilingual vocabulary in every subject.

Another interesting aspect is that many families with a non-English or non-French parent are enrolling their children in bilingual to get the best of both. The classes are filled with children and cultures from all over the world.

Kate also loves the schools focus on collaboration between the children and the way they learn how to resolve conflicts and compromise. I agree these are the soft skills that are as essential in adulthood, as hard skills. IIL is also the only school in Switzerland and France to implement the Finnish anti-bullying program – KiVa.

IIL is a well-rounded school with a community feel. Although the focus is on academics, the amount of homework grows with the children (but differently in each section). But this is not all. The Institute is also proud of its sports program, offers a rich artistic program, is very IT-oriented, and organizes enjoyable outings and events for children of all ages.

Following two curricula at once may seem like a lot for children, but IIL magically makes it work. I won’t lie to you, they work a lot, but they also play a lot, and everything is wrapped in a friendly and warm atmosphere. Of course the children learn academics but they are also encouraged to learn through games, collaboration and creativity.

Of course, IIL is not the only school with a bilingual program. But all these programs use different methods. Every school is different. With this article, I wanted to give you a glimpse into the International Institute of Lancy, do not hesitate to reach out to them in case of questions. Their friendly staff will be happy to answer your question or arrange a visit to the campus. Personally, I am very much intrigued and fascinated by their bilingual section!

Would you like to learn more about IIL’s programmes for children ages 3 to 12? In that case, I recommend you join their virtual tours early December. More info and sign up here.

9 and 12 December Virtual tours of START and Primary, the English French and bilingual sections for children age 3 – 12. More info and sign up here.